You are here: Home > Burgess Lab 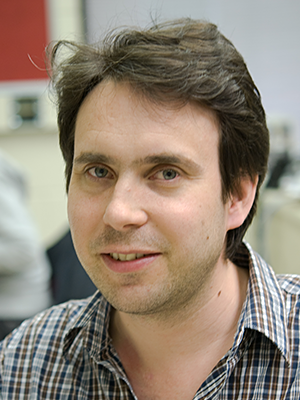 The Section on Behavioral Neurogenetics studies how, under diverse environmental contexts, the nervous system selects appropriate behavioral responses to sensory information in a way that best satisfies internal motivational objectives. We use the larval zebrafish as a model because its brain exhibits the basic architecture of the vertebrate brain but is much less complex than the mammalian brain. Despite the relative simplicity of their nervous system, zebrafish have a sophisticated repertoire of sensory-guided and internally driven behaviors. Furthermore, the optical clarity of the embryo facilitates visualization of individual neurons and their manipulation with genetic techniques. Behavior in larvae is innate and thus exhibits minimal variability between fish. Subtle alterations in behavior can therefore be robustly measured, making it possible to quickly assess the contribution of identified neurons to a variety of motor behaviors.

We focus on two aspects of behavioral regulation: the neuronal mechanisms by which sensory context regulates behavioral decisions and the pathways that sustain changes in behavioral state. Neuronal connections that allow the brain to integrate sensory and internal-state information are established through genetic interactions during development, and are frequently disrupted by gene mutations associated with neuro-developmental disorders. We can therefore use discoveries about sensorimotor integration pathways to understand how human disease genes disrupt brain development. To support these objectives, we develop new genetic tools and behavioral assays to probe the nexus between neuronal function and behavior at single-cell resolution.

Startle responses are rapid reflexes that are triggered by sudden sensory stimuli and which help animals defend against, or escape from, potentially threatening stimuli. In both fish and mammals, startle responses are initiated by giant reticulospinal neurons in the medulla, which receive short-latency sensory input from diverse sensory modalities. Although highly stereotyped, startle responses are nevertheless modulated by sensory context and behavioral state and are therefore an excellent system in which to understand how such information is integrated for behavioral choice. In mammals, including humans, the startle response to a strong auditory stimulus can be inhibited by pre-exposure to a weak acoustic ‘prepulse,’ a form of startle modulation, termed prepulse inhibition, that is diminished in several neurological conditions. Previously, we showed that in zebrafish, as in mammals, several distinct cellular mechanisms mediate prepulse inhibition depending on the time interval between the prepulse and the startle stimulus, with NMDA–receptor signaling playing a key role for intervals greater than 100 ms. Our work on resolving the core neuronal pathway that mediates prepulse inhibition provides a basis to probe how gene mutations linked to neuro-developmental disorders disrupt sensory processing. NMDA–receptor mutations have been linked to both autism-spectrum disorders and schizophrenia. Working collaboratively with the Sirotkin laboratory, we demonstrated that mutations in the NMDA–receptor subunit grin1 disrupt prepulse inhibition [Reference 1].

While studying defensive responses to auditory stimuli, we noted that cues of about an order of magnitude larger than those needed to provoke startle responses drove an unexpected freezing behavior, especially when repeatedly presented over a short period of time. In many species, overwhelming stimuli elicit a behavior known as tonic immobility, an ultimate response to inescapable threat. In humans, the experience of tonic immobility correlates with development of the post-traumatic stress disorder, yet very little is known about its underlying neural basis. Leveraging our library of Gal4 (a tool to modulate gene activity)–transgenic lines, we performed a screen to discover neurons that are required for such behavior in zebrafish. We isolated a cluster of neurons in the prepontine tegmentum that are necessary for sustained immobility after an intense auditory stimulus (Figure 1). By manually isolating and performing RNA-Seq on these neurons, we found that they express several stress-associated neuropeptides, including markers that make them likely homologs of part of the mammalian parabrachial complex, an area recently implicated in responses to noxious stimuli. Our screen also demonstrated a central role for cerebellar signaling in tonic immobility, and we found a direct projection from Purkinje neurons to the prepontine neurons, similar to recent work showing that a subset Purkinje neurons in mammals also directly project to the parabrachial nucleus. The study has identified for the first time a cellular pathway that mediates tonic immobility and suggests that the parabrachial has a deep evolutionary history in mediating defensive behavior [Reference 2]. 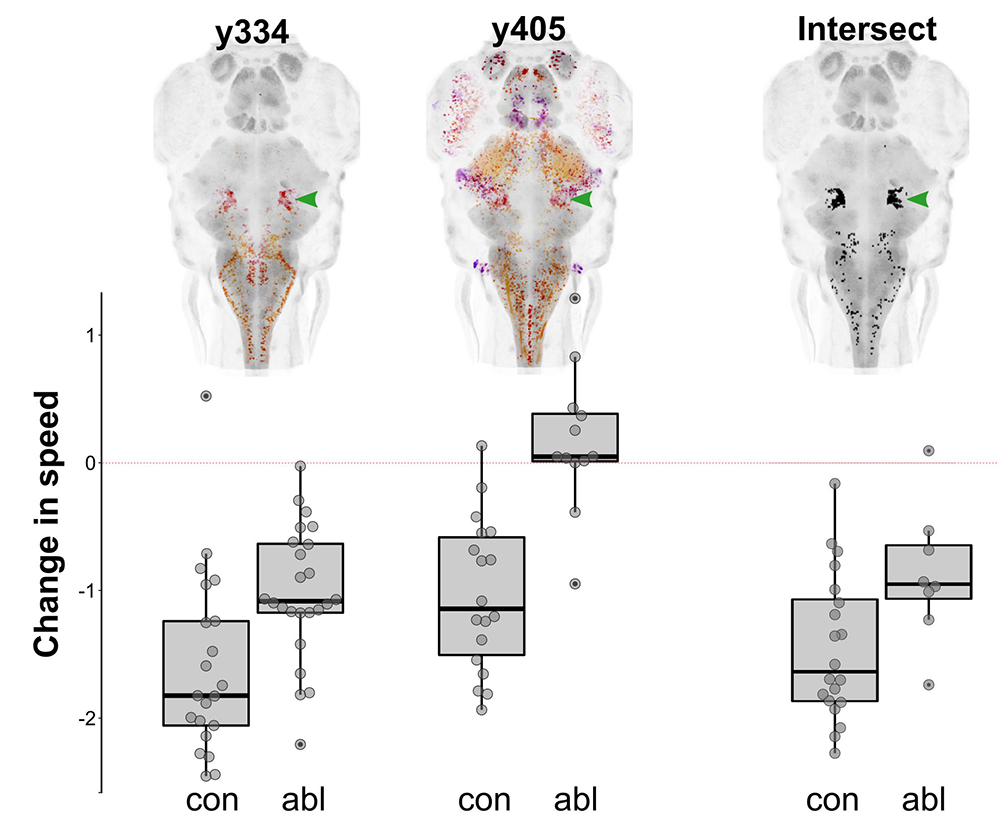 Depth-coded projections of Gal4 expression in two lines (y334 and y405) that label neurons whose ablation interferes with the reduction in spontaneous swimming in response to an intense auditory stimulus (bar graphs). The computational intersectional expression of y334 and y405 is shown, revealing a common cluster of neurons in the prepontine tegmentum (green arrowhead). Laser ablation of the prepontine cluster diminishes immobility in response to an intensity stimulus.

Over the course of the day, motivational goals change in response to both internal and external cues. At any given moment, an individual’s behavioral state strongly influences decisions on how to interact with the environment. A major goal in neuroscience is to identify the neural systems that maintain short-term behavioral states and to determine how they interact with central mechanisms for behavioral choice. In zebrafish, loss of illumination triggers a short-term behavioral state in which larvae show heightened locomotor activity. We previously demonstrated that light-sensitive neurons in the hypothalamus trigger this state of hyperactivity and that the response to loss of illumination is a part of a light-search behavior.

Unexpectedly, we noted that during the first two minutes in the dark, zebrafish repeatedly turn in a single direction, resulting in a circular swimming pattern, and that individual fish have a tendency to circle in a left or rightward direction. Left/right motor identity is stable across several days, and correlates also with left/right startle preference, when larvae are tested in the absence of overriding visual cues. Motor asymmetry is common across the animal kingdom and is manifested in humans as hand-preference. Although human handedness is known to be disrupted in several neuro-developmental disorders and has been the subject of much research, little is known about how it is generated during development, or maintained within the brain. We therefore used the opportunity to leverage our observation that zebrafish have an intrinsic motor asymmetry to investigate developmental and neural mechanisms.

To achieve this, we performed a circuit-breaking screen before testing for changes in motor bias. Two lines that labeled neurons required for motor bias both included a small group of around 60 cells in the posterior tuberculum, a forebrain region ventral to the thalamus. Unilateral laser ablation of posterior tubercular neurons imposed a motor bias on treated larvae, such that larvae with an intact left posterior tuberculum tended to circle rightward, and vice versa. We also found that an output pathway running through the habenula was required for such neurons to drive motor asymmetry. The experiments define the specific neuronal basis for motor asymmetry in zebrafish.

While conducting these studies, a spontaneous mutation occurred in our wild-type stock that strongly suppressed motor asymmetry. Using a high-throughput sequencing approach, we mapped the underlying genetic lesion to a small deletion of the first two exons in the gene epb41l5, and then used an independent mutation to confirm that fish with a heterozygous mutation in this gene fail to develop normal motor asymmetry. Given that epb41l5 interacts with members of the notch signaling pathway, we also tested left/right bias in heterozygous mutants with mib (an ubiquitin ligase that is essential for notch signaling) mutations, and again discovered loss of motor asymmetry. The findings indicate that normal acquisition of left/right motor identity is disrupted by gene mutations that quantitatively perturb Notch signaling levels during embryonic development [Reference 3].

To enable circuit-breaking screens, we generated several hundred new Gal4 and Cre lines that can provide intersectional targeting of small groups of neurons with a high degree of specificity. A unique feature of brain imaging in zebrafish is the ability to visualize the total architecture of the brain while simultaneously recording the position and morphology of every constituent labeled neuron. Thus, to make these tools accessible to the broader research community, we performed whole-brain imaging for each line, then registered the image of each line to the same reference brain. In collaboration with Nicholas Polys, we then developed an online brain atlas that enables researchers to quickly visualize the larval brain and locate transgenic lines to aid experiments. Such powerful visualization tools facilitate integrated analysis of reconstructed neuronal morphology in the context of the three-dimensional anatomy of the brain (Figure 2). Collaborating with several other groups, we noted that, as in mice, Cre lines have varying levels of susceptibility to germline recombination, necessitating care in using this tool for transgenic experiments [Reference 4].

In order to build a brain atlas, we optimized a protocol that permits highly precise brain registration. We showed that such high precision of alignment permits statistically robust whole-brain analysis of neuronal composition and morphology in zebrafish models of neurological disorders. The technique can be applied to almost any zebrafish neuro-developmental model, thus enabling robust and quantitative detection of subtle changes in brain structure or composition. In collaboration with the Stratakis lab, we applied brain morphometry to a zebrafish model of X-linked acrogigantism, revealing a developmental enlargement of the hypothalamus [Reference 5].

We then used the method to test brain structure and composition in zebrafish that carry mutations in genes that are homologous to human genes known to be disrupted in autism-spectrum disorder. By combining analysis of changes in brain structure and startle behavior in these mutants, we can define subsets of autism genes that have similar effects and are therefore likely to act in the same developmental pathways.

Example of a serotonergic neuron from the raphe nucleus (purple) that projects broadly throughout the brain, including into the eminentia granularis (yellow) and closely adjacent to the Mauthner escape neuron (green).