You are here: Home > Ozato Lab 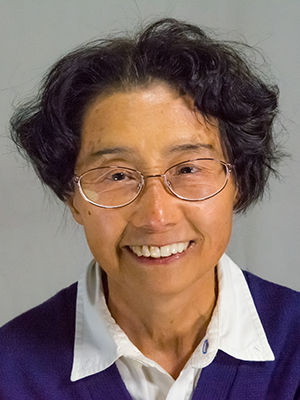 The laboratory is interested in chromatin and gene regulation in innate immunity. We study the role of three nuclear factors, histone H3.3, BRD4, and IRF8. Histone H3.3 is a variant histone that is incorporated into nucleosomes along with transcriptional elongation, an unusual but defining feature of the variant. Most other histones are deposited into nucleosomes during replication. For this reason, H3.3 is thought to be involved in epigenetic memory created by transcription, although experimental evidence for memory formation/maintenance is scant. BRD4 is a bromodomain protein of the BET family, expressed broadly in many cells, from early embryos to adults. Through the bromodomain, BRD4 binds to acetylated histones, not unacetylated histones. BRD4 is thus called a ‘chromatin reader,’ a type of regulatory factor capable of conveying epigenome information to gene expression. Furthermore, BRD4, binds to the elongation factor complex P-TEFb through the C-terminal domain, and drives transcription of many genes by driving RNA polymerase II to move through the gene body, generating nascent mRNA. Many recent reports point out that BRD4 promotes growth of cancer cells, including various blood cancers, by mediating the formation of super-enhancers involved in cell-cycle progression. As we reported in 1990, IRF8 is a DNA–binding transcription factor that plays an essential role in innate resistance to a wide array of pathogens (IRF8's structure is shown in Figure 1A). IRF8 is expressed mostly in cells of the myeloid lineage, including monocytes/macrophages, dendritic cells, and microglia. IRF8 is strongly induced when stimulated by interferons (IFN). In addition, it is upregulated when myeloid cells encounter pathogen-derived molecules and agents produced by stress. In turn, IRF8 activates many genes important for host resistance. IRF8–induced genes include those involved in autophagy and lysosome-mediated pathogen clearance. IRF8 does so by binding to small DNA motifs present in promoter and enhancer regions of the target genes. 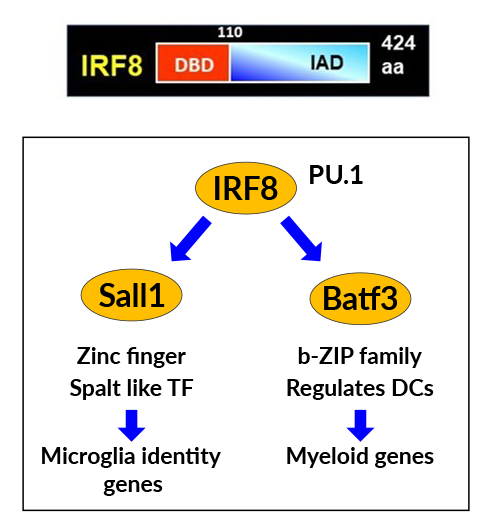 A. IRF8 structure. It has the DNA–binding and regulatory domains in N- and C-terminal regions.

Microglia are the sole cell type in the brain that protect against pathogen infection. They originate from the embryonic yolk sac as progenitors, which then migrate into the embryonic brain, where they differentiate into functional microglia in the postnatal stage. In the adult, microglia are distributed throughout the brain including in the cortex and hippocampus. Early reports demonstrated that the regulatory transcription factors Spi1(PU.1) and IRF8 take part in progenitor differentiation, but the role of IRF8 in adult microglia has not been fully understood. To this end, we examined microglia from Irf8 knockout (KO) mice and found that they have an abnormal morphology and do not express several microglia-specific surface markers. Using fluorescence activated cell sorting (FACS), we then sorted microglia from adult WT and Irf8 KO mice and performed bulk and single-cell RNA-Seq. Results revealed that, without IRF8, many genes that give microglia-specific properties were missing or downregulated, including cell-surface markers such as P2ry12, Iba1, Cx3cr1, and Ccr5. On the other hand, some of IFN–stimulated genes (ISGs) and disease-associated microglia (DAM) genes were aberrantly expressed in Irf8 KO microglia. In addition, we found that IRF8 is required for the expression of two transcription factors critical for adult microglia, i.e., Sall1 and Batf3 (Figure 1B). Our results show that IRF8 directs a transcriptional cascade that defines the microglia transcriptome program. It was important to determine the DNA sites in the microglia genome to which IRF8 binds, information that is missing in the literature. This was technically difficult, because microglia yields were low. Nevertheless, modified Cut&Run assay (Cut&Run or cleavage under targets and release using nuclease, a method to analyze protein interactions with DNA) provided reproducible IRF8–binding profiles. Our data showed that IRF8 binds mostly over distant enhancer regions, located upstream and downstream of its target genes (Figure 2). IRF8–binding sites were strongly enriched with DNA motifs containing the GAAA nucleotide sequence. In some enhancers IRF8 binding was closely clustered. Some of these sites were within the large ‘super-enhancers’ enriched with H3K27ac histone marks. Super-enhancers support transcription of genes essential for cell-type specific properties. IRF8–containing super-enhancers neighbored genes essential for microglia, including Sall1 and Batf3. Deletion of Irf8 led to loss of super-enhancers associated with microglia identity genes, including Sall1 and Batf3. Furthermore the ATAC-Seq assay (assay for transposase-accessible chromatin using sequencing) found that IRF8 is important for setting open chromatin necessary for microglia super-enhancers. Along with extensive changes in histone modification patterns in Brd4 KO cells, our results clearly show that IRF8 directs the formation of microglia-specific epigenome landscape. Consistent with this view, DNA methylome profiles revealed extensive changes in CpG methylation patterns, indicating that IRF8 regulates overall CpG–island methylation patterns.

In a recently published study on a mouse model of Alzheimer’s disease (AD), it was suggested that IRF8 is involved in the progression of the disease. We investigated an AD mouse model (5FAD) with and without the Irf8 gene. Our transcriptome and other analyses indicate that IRF8 has dual roles and can promote AD pathogenesis in a complex manner. 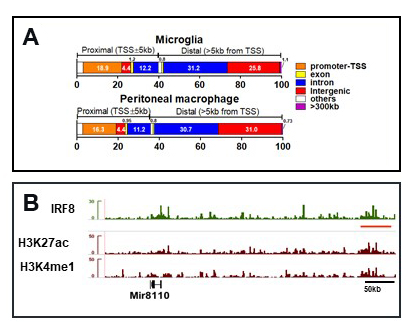 A. IRF8 binds to intergenic and introgenic regions of microglia. Comparison with peripheral myeloid cells.

B. IGV track example on the Sall1 locus. IRF8 binding closely coincides with the super-enhancer marks H3K27ac and H3K4me1.

Cell proliferation depends on continuous rounds of cell-cycle progression and is driven by sequential activation of transcription factors and by other post-translational effectors. The chromatin-binding factor BRD4 is known to promote the proliferation of many cancers, and BRD4 inhibitors (BETi) can arrest cancer growth (see Figure 3A for BRD4 structure). BETi thus offer a new possibility for anti-cancer therapy. However, the role of BRD4 in controlling proliferation of normal cells has remained elusive. We examined the role of BRD4 in normal cell growth by testing cells from Brd4 conditional knockout (KO) mice. Cell-cycle analysis of wild-type (WT) and Brd4 KO fibroblasts showed that BRD4 is required for transition from G0-G1, G1-S, and G2-M (Figure 3B). At the G2 to M stage, many Brd4 KO cells underwent catastrophic mitotic failure, as chromosomes failed to align and segregate properly, leading to apoptosis. Transcriptome analysis found that many cell cycle–regulated genes were markedly downregulated in Brd4 KO cells, including several histone genes at S phase, as well as the G2/M master regulators FOXM1 and ATM/ATR. FOXM1 is a transcription factor of the forkhead family and promotes transcription of many G2/M genes. ATM/ATR are kinases previously known to be involved in DNA–damage repair. ATR/ATM were recently shown to play a role at the G2-M transition in growing cells. Our results indicate that BRD4 drives transcription of numerous cell cycle–regulated genes. Consistent with these results, BRD4 occupies numerous cell-cycle genes throughout all stages, as revealed by ChIP-Seq analysis. BRD4 binds to these genes at all stages of the cell cycle, which can be seen at the transcription start site (TSS) and gene body. Together, BRD4 orchestrates the entire cell-cycle program in normal and cancer cells. 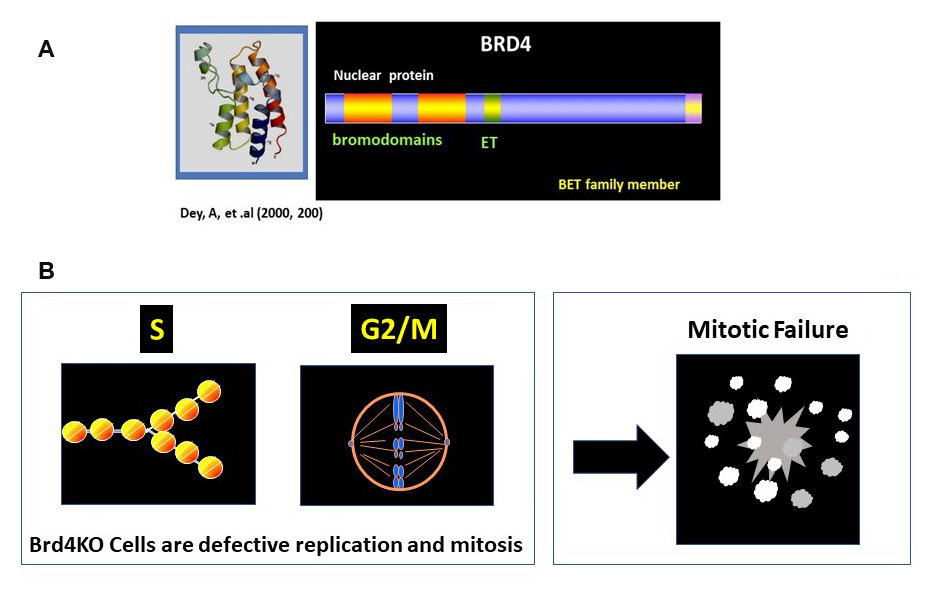 A. Structure of BRD4. It has two bromodomains and the ET domain at the C-terminus.

B. S and G2/M progression depends on BRD4. DNA and histone replication and as well as mitotic cell division depend on BRD4. Brd4KO cells undergo catastrophic mitotic failure.

Recent studies highlight that BETi can arrest cancer cell growth not only by inhibiting transcription of cell-cycle genes but by inflicting DNA damage. Such reports put forward a new role for BRD4 beyond chromatin reading and transcription. We tested whether Brd4KO cells, like BETi–treated cells, suffer DNA damage. Brd4KO cells indeed showed a marked increase in phospho-H2AX foci in the nucleus (Figure 4). H2AX is a variant histone H2 phosphorylated upon DNA damage, a highly reliable marker for DNA damage. Phospho-H2AX foci thus represent the site of DNA damage. Increased DNA damage in Brd4KO cells was confirmed by R-loop formation and nuclear disintegration assays. S phase cells displayed more DNA damage than did G1 cells, suggesting that DNA damage may be associated with defective DNA/histone replication in Brd4KO cells. Thus, in the absence of BRD4, cell cycle progression without external stress causes DNA damage. DNA damage is known to occur upon oxidative stress, as it causes single-strand and double-strand DNA breaks. Our results show that BRD4 prevents DNA damage by mechanisms and pathways that have yet to be deciphered. It will be important to further study how BRD4 inhibits DNA damage or facilitate repair. 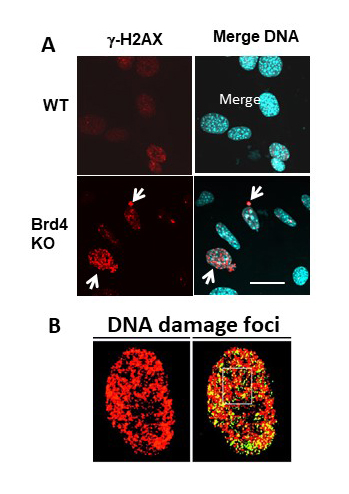 We have been interested in the role of histone H3.3, as this histone is implicated in transcriptional memory. Previous work showed that H3.3 localizes to actively transcribed and bivalent regions. The process is mediated by the H3.3–specific histone chaperone HIRA. H3.3 also localizes to heterochromatin regions including the telomere regions, where transcription is silenced. The latter process is mediated by another chaperone, ATRX. Thus, H3.3 localization is thought to change dynamically according to changes in transcriptional activity. However, genome-wide dynamics of H3.3 distribution has not been well deciphered, particularly in cells in vivo. To this end, we generated a mouse model to readily localize H3.3 in various in vivo cells, constructing knock-in mice carrying HA–tagged H3.3 for both H3.3 genes (H3f3a and H3f3b). With this model, we showed that H3.3 is present in all adult tissues tested, including various immune cells. We plan to study H3.3 distribution in hematopoietic stem cells (HSCs) and myeloid-lineage cells, including monocytes/macrophages and microglia.

Our previous study showed that H3.3 is robustly deposited on many genes after interferon (IFN) stimulation, which creates transcriptional memory for IFN response. To investigate the biological significance of IFN–induced H3.3 deposition, we constructed another set of mice to conditionally knockout H3.3. Currently, we are testing IFN memory in the bone marrow (BM)–derived macrophage (BMDM) model. First, we found that deletion of H3.3 did not prevent development of phenotypically normal macrophages, indicating that H3.3 is partly dispensable for myeloid progenitors to differentiate into macrophages. To our surprise, H3.3–deleted macrophages expressed a subset of IFN–stimulated genes even without IFN stimulation. Our results point to the idea that H3.3 directs a complex regulatory process affecting fundamental innate immunity. Cut&Run analysis found that H3.3 deletion globally alters of histone modification patterns, indicating a previously unknown role for H3.3 in regulating epigenome structure and transcription.

Because HIRA deposits histone H3.3 specifically in the genic regions, this histone chaperon is likely to play a role in the defining epigenome landscape and transcriptome programs, including transcriptional memory. We constructed Hiraf/f mice carrying Vav-Cre in which the Hira gene is deleted in HSCs. It is of note that HIRA is deleted in DiGeorge syndromes, where an over 11 Mb DNA stretch of Chr. 22 (containing HIRA) is deleted. Patients with DiGeorge syndrome manifest varied abnormalities, some including immunodeficiency and thrombocytopenia. Our analysis found that HIRA is essential for the development and maintenance of BM HSCs, in that long-term (LT) HSCs, which provide self-renewal and progenitor differentiation capacity, were virtually absent from Hira KO mice. In addition, Hira KO mice were deficient in all three blood lineages, erythroid, myeloid, and lymphoid cells, leading to anemia, thrombocytopenia, and severe immunodeficiency (Figure 5). While some T cells were found in peripheral lymphoid organs, including the thymus and lymph nodes, mature B cells were nonexistent in Hira KO mice. Adoptive transfer experiments verified the defects in BM LT-HSC. However, fetal hematopoiesis was normal in Hira KO mice, although fetal HSCs lacked reconstitution capacity. Transcriptome analysis revealed that HIRA is required for the expression of many transcription factors and signaling molecules critical for HSCs. ATAC-Seq analysis revealed that HIRA is required for establishing HSC–specific DNA accessibility, including to the SPI1/PU.1 sites. Our study demonstrates that HIRA creates a chromatin environment essential for HSCs to carry out self-renewal and differentiation activity (Figure 5). 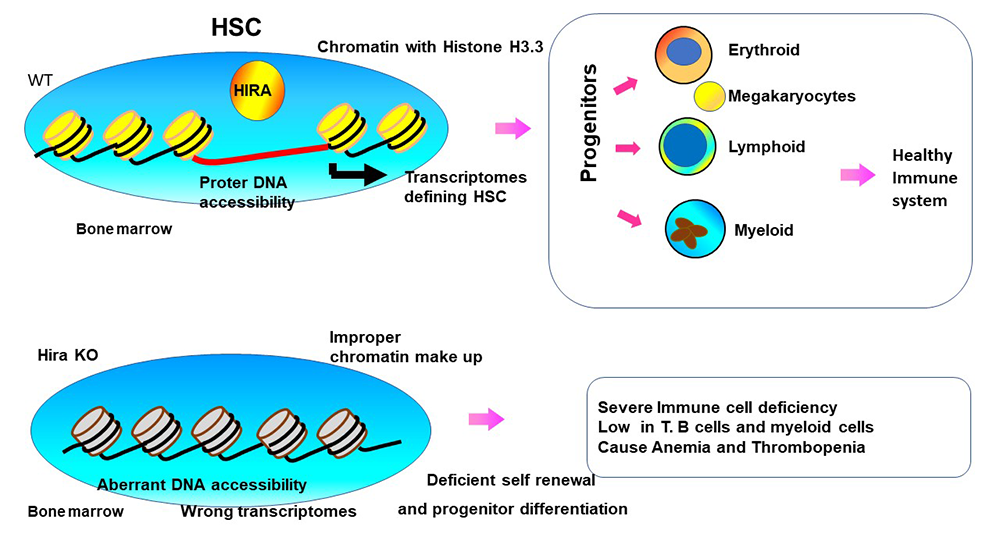 HSCs have two essential functions, to self-renew and differentiate into mature hematopoietic cells. Analysis of Hira KO mice reveals that acquisition and maintenance of these functions are dependent on HIRA. RNA-Seq and ATAC-Seq data show that HIRA sets the epigenome landscape and transcription programs that enable HSC to gain and execute HSC function.