You are here: Home > Porter Lab 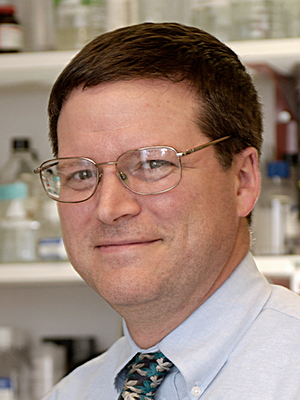 We study the molecular, biochemical, and cellular processes that underlie genetic disorders resulting from impaired cholesterol homeostasis and lysosomal dysfunction. The disorders include malformation/cognitive impairment syndromes resulting from inborn errors of cholesterol synthesis and neurodegenerative disorders resulting from impaired intracellular cholesterol and lipid transport. Human malformation syndromes attributable to inborn errors of cholesterol synthesis include the Smith-Lemli-Opitz syndrome (SLOS), lathosterolosis, desmosterolosis, X-linked dominant chondrodysplasia punctata type 2 (CDPX2), and the CHILD syndrome. We also undertake complementary basic and clinical research efforts to study Niemann-Pick disease type C (NPC) and Juvenile Batten disease caused by pathogenic variants of CLN3. Both NPC and CLN3 are lysosomal diseases that result in progressive neurodegeneration. Our research group uses basic, translational, and clinical research approaches with the ultimate goal of developing and testing therapeutic interventions for these rare genetic disorders. Our basic research uses induced pluripotent stem cells (iPSC)–derived neuronal, zebrafish, and mouse models of these genetic disorders to understand the biochemical, molecular, cellular, and developmental processes that underlie the birth defects and clinical problems encountered in affected patients. Our clinical research focuses on translating basic findings to the clinic. Natural history trials of SLOS, CLN3, and NPC1 are ongoing. We have large cross-sectional and longitudinal collections of biomaterial from individuals whose disease course and phenotype are known, and such samples can be used for both for biomarker discovery and validation. Therapeutic trials have been conducted for SLOS and NPC1. A therapeutic trial for CLN3 disease is being initiated. Also, in collaboration with NCATS (the National Center for Advancing Translational Sciences), our research group has been involved in a multicenter trial of creatine transporter deficiency. 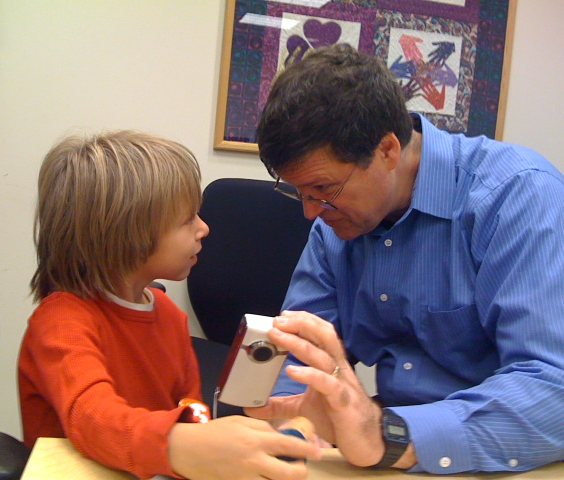 Dr. Porter and one of our patients. Neurological exams in children frequently involve ‘playing’ with the child.

SLOS is an autosomal recessive, multiple-malformation syndrome characterized by dysmorphic facial features, cognitive impairment, hypotonia, poor growth, and various structural anomalies of heart, lungs, brain, limbs, gastrointestinal tract, and genitalia. The SLOS phenotype is extremely variable. At the severe end of the phenotypic spectrum, infants often die as result of multiple major malformations, while mild SLOS combines minor physical malformations with behavioral and learning problems. The syndrome is the result of an inborn error of cholesterol biosynthesis that blocks the conversion of 7-dehydrocholesterol (7-DHC) to cholesterol.

Our laboratory initially cloned the human 3beta-hydroxysterol delta 7-reductase gene (DHCR7) and demonstrated mutations of the gene in SLOS patients. Together with others, we have so far identified over 100 mutations of DHCR7. We also used gene targeting in murine embryonic stem cells to produce several SLOS mouse models, including a null deletion and a hypomorphic point mutation. Mouse pups homozygous for the null mutation (Dhcr7delta3–5/delta3–5) exhibit variable craniofacial anomalies, are growth-retarded, appear weak, and die during the first day of life because they fail to feed. Thus, we were not able to use them to study postnatal brain development, myelination, or behavior or to test therapeutic interventions. For this reason, we developed a missense allele (Dhcr7T93M). The T93M mutation is the second most common mutation found in SLOS patients. Dhcr7T93M/T93M and Dhcr7T93M/delta3–5 mice are viable and demonstrate SLOS with a gradient of biochemical severity (Dhcr7delta3–5/delta3–5 greater than Dhcr7T93M/delta3–5 and greater than Dhcr793M/T93M). We used Dhcr7T93M/delta3–5 mice to test the efficacy of therapeutic interventions on tissue sterol profiles. As expected, dietary cholesterol therapy improved the sterol composition in peripheral tissues but not in the central nervous system. Treatment of mice with the statin simvastatin improved the biochemical defect in both peripheral and central nervous system tissue, suggesting that simvastatin therapy may be used to treat some of the behavioral and learning problems in children with SLOS. Most recently, we developed a zebrafish model for SLOS that will allow us to study the impact of aberrant cholesterol synthesis on behavior. Characterization of iPSCs from SLOS patients demonstrated a defect in neurogenesis, which results from inhibition of Wnt signaling owing to a toxic effect of 7-DHC.

We are conducting a longitudinal Natural History trial. Given that SLOS patients have a cholesterol deficiency, they may be treated with dietary cholesterol supplementation. To date, we have evaluated over 125 SLOS patients. The studies are now focused on defining the phenotype of older adolescents and young adults with SLOS.

A laboratory observation that SLOS fibroblasts can develop an NPC–like cellular phenotype with endolysosomal storage of unesterified cholesterol is leading to development of a therapeutic trial. This is a prime example of how our research group translates basic research to clinical research.

One reason for studying rare genetic disorders is to gain insight into more common disorders. Most patients with SLOS exhibit autistic characteristics. We are currently collaborating with other NIH and extramural groups to further evaluate this finding. 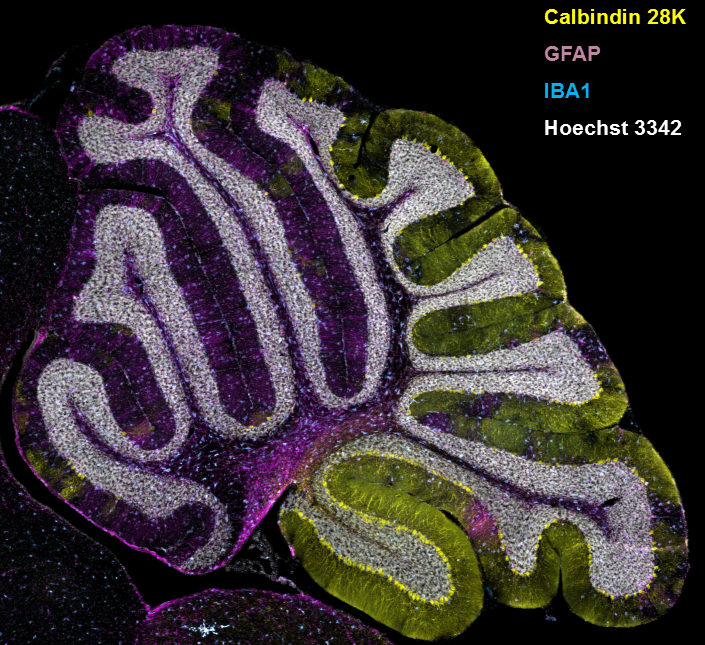 Immuno-staining of a sagittal section from the cerebellum of an NPC1–mutant mouse. Cerebellar Purkinje neurons are stained for calbindin 28K, and the expected loss of anterior Purkinje neurons is readily apparent. Expression of GFAP and IBA1 are used to detect astrogliosis and microgliosis, respectively. Nuclei are stained with Hoechst 3342.

Niemann-Pick disease type C1 (NPC1) is a neurodegenerative disorder that results in ataxia and dementia. In view of the dementia, it has been referred to as childhood Alzheimer's disease. The disorder is caused by a defect in intracellular lipid and cholesterol transport. Initially, as part of a bench-to-bedside award, we began a clinical protocol to identify and characterize biomarkers that could be used in a subsequent therapeutic trial. The project also received support from the Ara Parseghian Medical Research Foundation and Dana’s Angels Research Trust. We enrolled over 130 NPC1 patients in a longitudinal Natural History trial. The goals of the trial are to identify (1) a blood-based diagnostic/screening test, (2) biomarkers that can be used as tools to facilitate development and implementation of therapeutic trials, and (3) clinical symptoms/signs that may be used as efficacy outcome measures in a therapeutic trial.

Currently, the average time from first symptom to diagnosis, the ‘diagnostic delay,’ in our cohort of NPC patients is on the order of four to five years. In collaboration with Daniel Ory, we found elevated levels of non-enzymatically produced oxysterols in NPC1 patients. Testing for oxysterols or bile acid derivatives has now become a standard method of diagnosis, and they are a potential biomarker that may be used to follow therapeutic interventions. We are now involved in a collaboration to implement newborn screening for NPC.

In addition to our Natural History study, we completed a randomized, placebo-controlled, cross-over trial to investigate the safety and efficacy of N-acetyl cysteine (NAC) in NPC1. The goal was to determine whether NAC treatment would reduce oxidative stress and subsequently lower levels of the non-enzymatically produced oxysterols. We also tested the safety and efficacy of the histone deacetylase (HDAC) inhibitor vorinostat in adult NPC1 patients. In collaboration with the Therapeutics of Rare and Neglected Disease Program of NCATS, we completed a phase 1/2a therapeutic trial of lumbar intrathecal cyclodextrin (VTS-270, adrabetadex) therapy in NPC1. We participated in a multicenter, international phase 2b/3 of adrabetadex and investigated the safety and efficacy of combined intrathecal and intravenous adrabetadex. In collaboration with investigators at St. Louis Children's Hospital, we study the efficacy of cyclodextrin to ameliorate liver disease in infants with NPC.

To complement the clinical work, we have begun to apply molecular and proteomic approaches to both mouse and human biomaterials in order to identify biological pathways disrupted in NPC1. We identified several blood and CSF (cerebral spinal fluid) proteins and are in the process of validating the biomarkers as potential outcome measures to be used as tools in the development of therapeutic interventions. In collaboration with investigators from NHGRI and Scripps, we are obtaining genomic sequence on a large cohort of well phenotyped individuals with NPC1. Utilizing novel machine learning/artificial intelligence techniques, we are attempting to gain insight into genetic modifiers of the NPC1 phenotype.

Development of NPC– induced pluripotent stem cell lines that can be efficiently differentiated into neurons has permitted us to initiate a number of studies in collaboration with NCATS to find drugs/genes that decrease endolysosomal cholesterol storage in NPC1 neurons. 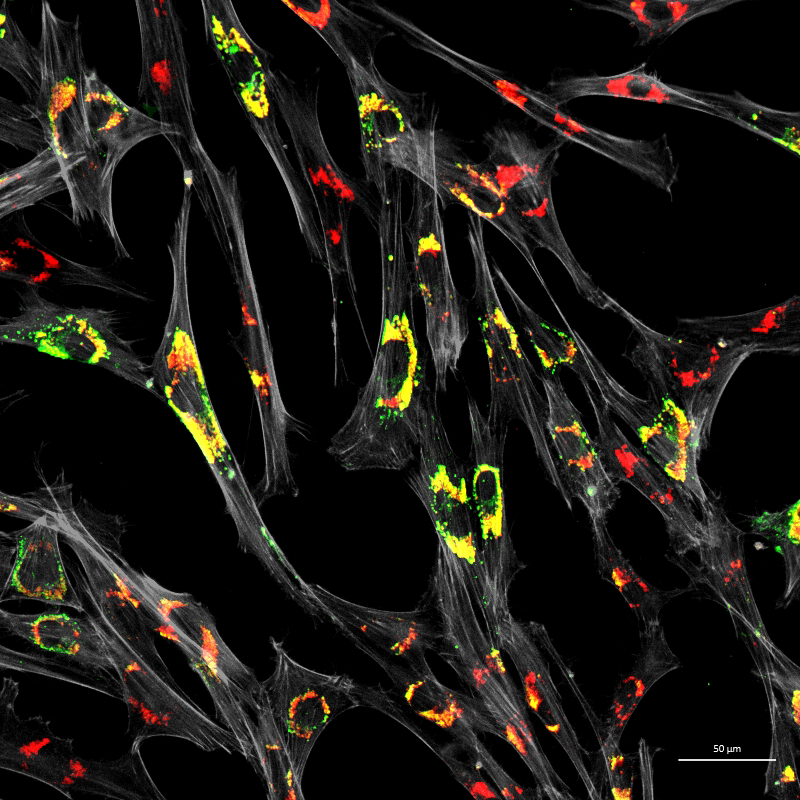 Human NPC1 fibroblasts were immuno-stained for Lamp1 (green) and stained with filipin (red); filipin stains unesterified cholesterol, which accumulates in the Lamp1–positive endolysosomal compartment. Cell structure was outlined by immuno-staining for actin (gray).

CLN3 disease (juvenile Batten disease) is an autosomal recessive, progressive neurodegeneration arising from mutation of CLN3, the gene encoding the lysosomal/endosomal protein battenin. The function of the battenin is not known, but its absence leads to a lysosomal storage disorder. Children with CLN3 disease typically first lose vision, followed by progressive cognitive and motor impairment. Similar to the other disorders that we study, our goal is to conduct a natural history study in order to facilitate studies designed to understand the pathology underlying these disorders as well as to develop therapeutic interventions. A major effort in our laboratory is to identify biomarkers that provide insight into CLN3 pathology and facilitate therapeutic trials. A diagnostic metabolite, especially one that could be used in a newborn screen, would be a major advance in the field.

To complement our clinical research, we are also studying CLN3 in our laboratory. We have developed an induced pluripotent stem cell line that can efficiently be induced to form CLN3–deficient neurons. The neurons are being used in genome-wide CRISPRi screens to identify genes that modify the CLN3 neuronal phenotype. The induced pluripotent stem cells (iPSC)–derived neurons will also be used to screen for potential therapeutic drugs.

In collaboration with NCATS, we initiated a natural history trial of creatine transport deficiency (CTD). CTD is an X-linked disorder arising from mutation of SLC6A8 (which encodes solute carrier family 6 Member 8, a sodium- and chloride-dependent creatine transporter). Individuals with CTD manifest significant developmental delay and have frequent seizures. The work on CTD is a multicenter trial conducted in collaboration with NCATS and Ultragenyx. Our goal is to obtain detailed natural history data, establish a biorepository, find biomarkers, and identify potential clinical outcome measures in preparation for a therapeutic trial. A major clinical finding of this natural history trial was the detailed characterization of prolonged electrocardiographic QTc in many of the individuals with CTD, which has led to specific clinical recommendations. 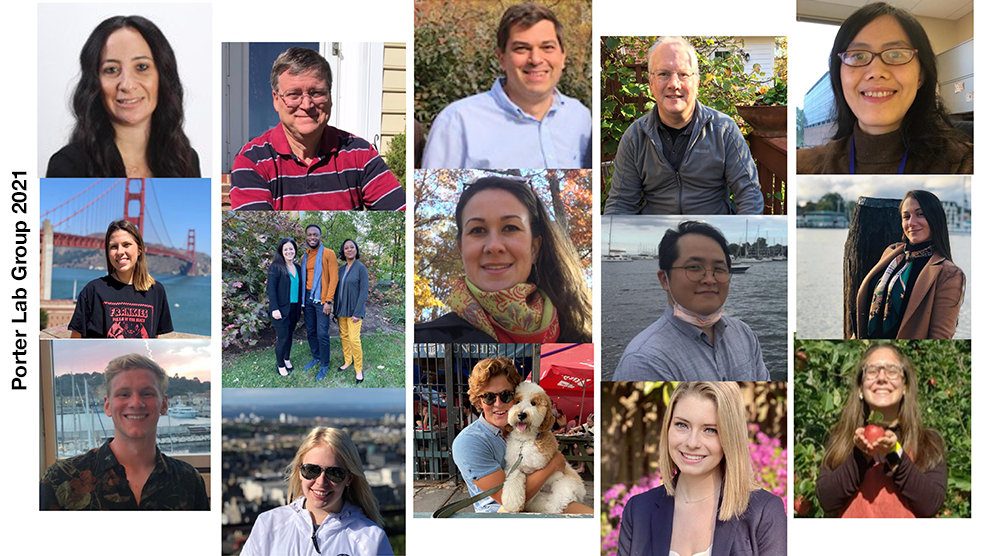