You are here: Home > Yanovski Lab

Physiology, Psychology, and Genetics of Obesity 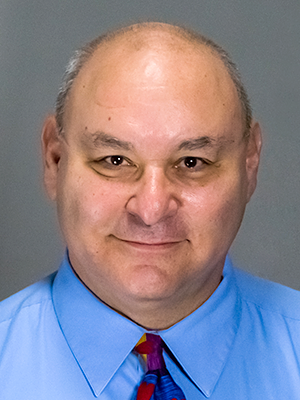 The prevalence of overweight and obesity in children and adults has tripled during the past 40 years. The alarming rise in body weight has likely occurred because the current environment affords easy access to energy-dense foods and requires less voluntary energy expenditure. However, such an environment leads to obesity only in those individuals whose body weight–regulatory systems are not able to control body adiposity with sufficient precision in our high calorie/low activity environment, which suggests there are subgroups in the U.S. with a uniquely high susceptibility to weight gain under the prevailing environmental conditions. Our primary goal is to elucidate the genetic underpinnings of the metabolic and behavioral endo-phenotypes that contribute to the development of obesity in children. Using our unique longitudinal cohorts of children who have undergone intensive metabolic and behavioral phenotyping, we examine genetic and phenotypic factors predictive of progression to adult obesity in children who are in the “pre-obese” state, allowing characterization of phenotypes unconfounded by the impact of obesity itself. Once they are identified as linked to obesity, we intensively study genetic variants that impair gene function. We expect that such approaches will improve our ability to predict which children are at greatest risk for obesity and its comorbid conditions and will lead to more targeted, etiology-based prevention and treatment strategies for pediatric obesity.

To identify gene variants affecting body composition, we have been examining polymorphisms in genes involved in the leptin signaling pathway. Such genes include the leptin receptor (LEPR), genes that appear to alter leptin receptor signal transduction such as those that are part of the BBSome (a protein complex of seven proteins), and those encoding proopiomelanocortin (POMC), the melanocortin 3 receptor (MC3R), the melanocortin 4 receptor (MC4R), and brain-derived neurotrophic factor (BDNF). We are currently studying a variant MC3R that is associated with adiposity in children and adults and appears to have functional significance for MC3R–signal transduction. Children and adults who were homozygous variant for both C17A and G241A polymorphisms have significantly greater fat mass and higher plasma levels of insulin and leptin than unaffected or heterozygous children and appear to eat more at laboratory test meals (Figure 1). In vitro studies subsequently found that signal transduction and protein expression were significantly lower for the double mutant MC3R. Our ongoing studies attempt to understand the mechanisms by which these sequence alterations affect body weight. We therefore developed transgenic ‘knock-in’ mice expressing the human wild-type and human double-mutant MC3R. Using homozygous knock-in mouse models replacing murine Mc3r with wild type human (MC3RhWT/hWT) and double-mutant (C17A+G241A) human (MC3RhDM/hDM) MC3R, we found that MC3RhDM/hDM mice have greater weight and fat mass (Figure 2), increased energy intake, and feeding efficiency, but lower length and fat-free mass than MC3RhWT/hWT. MC3RhDM/hDM mice do not have increased adipose tissue inflammatory-cell infiltration or greater expression of inflammatory markers despite their greater fat mass. Serum adiponectin is elevated in MC3RhDM/hDM mice and in MC3RhDM/hDM human subjects (Figure 2). MC3RhDM/hDM bone- and adipose tissue–derived mesenchymal stem cells (MSCs) differentiate into adipocytes that accumulate more triglyceride than do MC3RhWT/hWT MSCs. MC3RhDM/hDM thus impacts nutrient partitioning to generate increased adipose tissue that appears metabolically healthy. These data confirm the importance of MC3R signaling in human metabolism and suggest a previously unrecognized role for the MC3R in adipose tissue development. Ongoing studies continue to improve our understanding of the phenotype of such mice. We are investigating a novel role for MC3R in regulating hepatic autophagy, the role of MC3R in stem-cell fate, and how variations in Mc3r may alter signaling of several downstream signaling pathways. Using tissue-specific knockout and reactivation models (Reference 1), we are also studying the importance of hepatic and adipose tissue MC3R for whole body homeostasis.

Children homozygous for two polymorphisms in the MC3R gene (Hom/Hom) consumed more at the buffet than heterozygotes (Het/Het) or than those with wild-type MC3R (Wt/Wt). 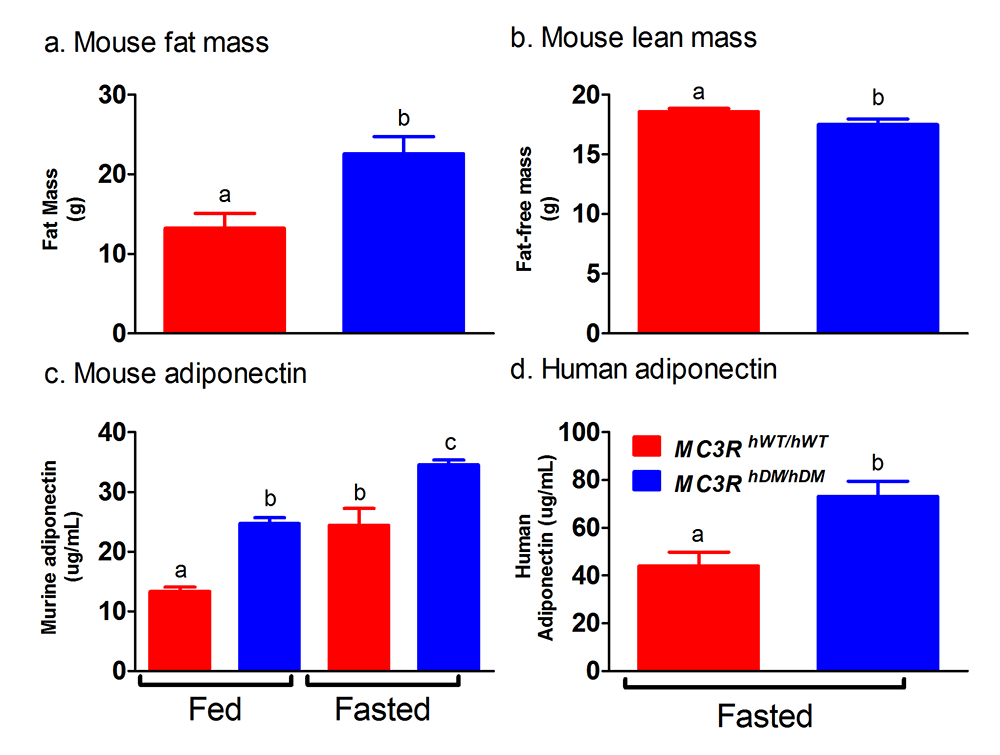 The variant is associated with pediatric-onset obesity. We found that mice whose Mc3r was replaced by human versions of the gene were obese when they expressed the double-mutant gene (MC3RhDM/hDM), with greater fat mass (a) and lower fat-free mass (b), but surprisingly greater adiponectin concentrations (c) than mice with the normal human MC3R (MC3RhWT/hWT). Humans with the double-mutant receptor also showed greater adiponectin (d).

Our studies are directed at understanding the physiological, psychological, and metabolic factors that place children at risk for undue weight gain. As part of these studies, we examined how best to measure eating-related psychopathology, insulin sensitivity, changes in body composition, energy intake, and energy expenditure in children, and we studied the short- and long-term stability of the components of the metabolic syndrome. We had previously found that leptin is an important predictor of weight gain in children, and we identified children with hyperleptinemia and leptin-receptor mutations. We also found hyperleptinemia to be out of proportion with body fat mass in children with psychological loss of control (LOC) over eating. Such data suggest the importance of leptin resistance as a factor stimulating weight gain and led to recent explorations of other syndromes associated with obesity that may cause dysregulation of leptin signaling, including WAGR, Bardet-Biedl (Reference 2), and Alström syndromes. Current studies are directed at understanding additional genetic, physiological, and psychological factors that place children at risk for undue weight gain, including humoral factors, sleep, food cravings (Reference 3), negative affective states such as depression and anxiety, weight-based teasing, alexithymia, executive functioning, and LOC eating. Some recent initiatives have targeted insulin resistance in girls at high risk for type 2 diabetes because of obesity and a family history of diabetes.

Our evaluations concentrating on binge-eating behaviors in children suggest that such behaviors also are associated with adiposity in children and abnormalities in metabolism. We found that binge-eating behaviors may predict future weight gain in children at risk for obesity: children reporting binge-eating behaviors such as LOC over eating gained, on average, 2.4 kg more weight per year than non-binge-eating children. Our data also suggest that children endorsing binge eating consume more energy during meals. Actual intake during buffet meals averaged 400 kcal more in children with binge eating, but despite their greater intake, such children reported shorter-lived satiety than children without binge-eating episodes. The ability to consume large quantities of palatable foods, especially when coupled with reduced subsequent satiety, may play a role in the greater weight gain found in binge-eating children. Among cohorts of lean and obese youth, we demonstrated that youth with LOC eating had higher serum leptin and are at significantly greater risk for worsening of components of the metabolic syndrome than those without LOC episodes, even after adjusting for adiposity and other relevant covariates. Our data also suggest that anxiety symptoms may interact with LOC eating to become an important co-factor for excessive weight gain among children. These data also suggest that interventions targeting disordered eating behaviors may be useful in preventing excessive fat gain in children prone to obesity and have led to trials of preventative strategies related to binge eating.

In order to determine the factors that are most important for the development of the complications of obesity in youth, we study normal-weight children and adolescents, children who are already obese, and the children of obese parents who themselves are not obese. We examine body composition, leptin concentration, metabolic rate, insulin sensitivity, glucose disposal, energy intake at buffet meals, energy expenditure (Reference 4), and genetic factors believed to regulate metabolic rate and body composition. Psychological and behavioral factors, such as propensity to engage in binge-eating behavior (Figure 3), and sleep are also studied. We follow children longitudinally into adulthood. In two protocols, we study actual food consumption of children during meals, to elucidate differences in the calorie and macronutrient content of meals and the circulating hormones related to hunger and satiety, in those who either endorse binge-eating behaviors or report no such behaviors. We found that eating in the absence of physiological hunger is a replicable trait that appears linked to obesity. We also investigated the role of sedentary behaviors, such as television watching, as a factor that alters metabolism. In a randomized, controlled, crossover trial (Figure 4), we found that glucose homeostasis was markedly better in children with overweight or obesity who engaged in moderate activity for just three minutes every half hour than in those who remained sedentary.

Figure 3. Loss of control (LOC) eating and metabolic complications in a longitudinal study 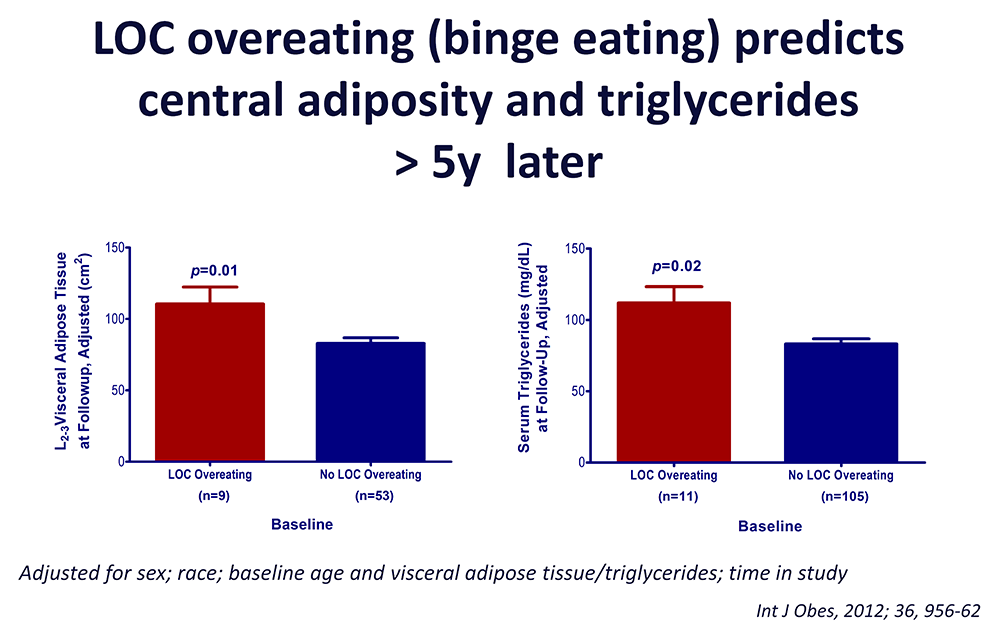 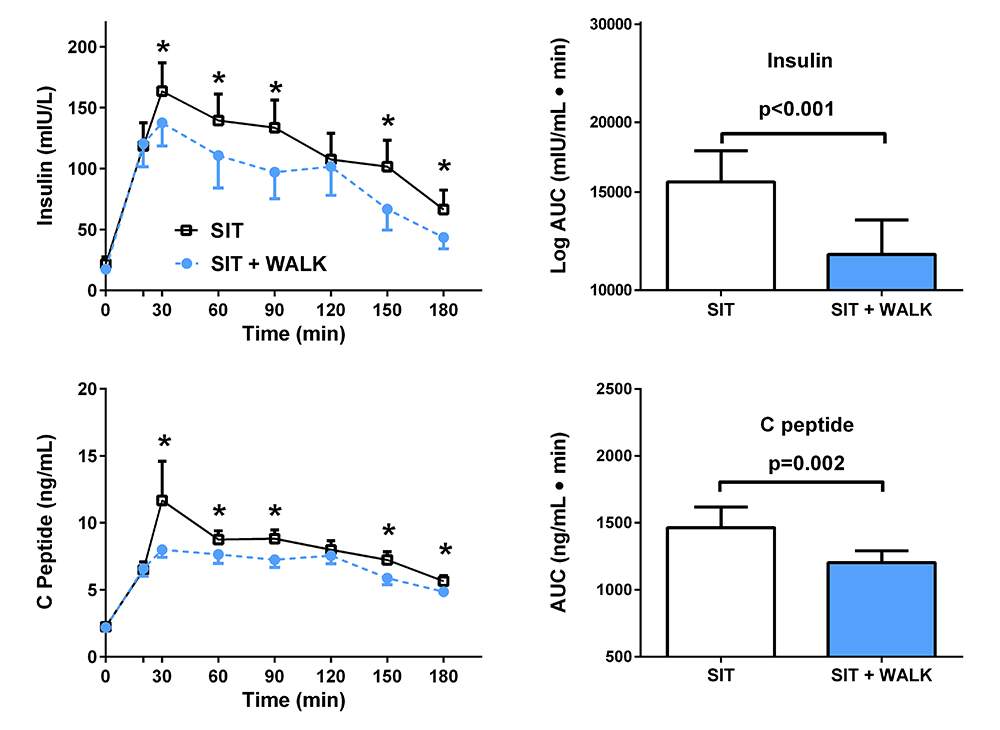 Children with overweight or obesity who walked for three minutes every 30 minutes (blue) had lower insulin and C-peptide concentrations during an oral glucose tolerance test than when they sat without interruption for three hours (black).

Treatment of obesity and the co-morbid conditions associated with obesity

Given the rapid increase in the prevalence of obesity, the development of treatments for obesity in children and adults is urgently needed, yet current pharmacologic approaches are extremely limited, for both children and adults. In several clinical protocols, we examined approaches for the prevention and treatment of excessive body weight. We completed a randomized controlled trial to examine the mechanism by which metformin may affect the body weight of younger children who have hyperinsulinemia and are therefore at risk for later development of type 2 diabetes. Those randomized to metformin decreased BMI, BMI-Z score, and body fat mass to a significantly greater extent than did placebo-treated children. Serum glucose and HOMA-IR (homeostatic model assessment for insulin resistance) were also significantly lower in metformin-treated than in placebo-treated children.

A second study compared prevention of weight gain using interpersonal therapy (IPT) with a control health education program (HE) in adolescents reporting LOC eating behaviors. At three-year follow-up, baseline social-adjustment problems and trait-anxiety significantly moderated outcome. Among girls with high self-reported baseline social-adjustment problems or anxiety, IPT was associated with the steepest declines in BMIz compared with HE. For adiposity, girls with high or low anxiety in HE and girls with low anxiety in IPT experienced gains, while girls in IPT with high anxiety stabilized. Parent reports yielded complementary findings. Such results have stimulated ongoing research to examine how anxiety may stimulate energy intake. We also published preliminary data from a third study examining IPT approaches in younger children, finding good tolerability for such a program.

A fourth study examined whether reducing depressive symptoms could ameliorate insulin resistance in adolescents at risk for type 2 diabetes. Among girls with greater (moderate) baseline depressive symptoms (N = 78), those in cognitive behavioral therapy (CBT) developed significantly lower two-hour insulin than those in HE. Additional metabolic benefits of CBT were seen for this subgroup in post hoc analyses of post-treatment to one-year change.

An ongoing study based on lab data finding links between attentional biases to high-palatability foods in children with obesity examines whether adolescents’ attentional biases can be retrained. We also initiated a translational trial studying the effects of modulation of the leptin signaling pathway with the melanocortin agonist setmelanotide in patients with proximal signaling defects in patients with Bardet Biedl syndrome (Reference 2). Most recently, we initiated another study of specific pharmacotherapy for patients with Prader-Willi syndrome using diazoxide. These latest trials are examples of precision-medicine approaches to treat obesity. We also recently completed a novel randomized-controlled pilot trial of colchicine to ameliorate the inflammation of obesity and thus improve its complications (Reference 5). Adults with obesity and the metabolic syndrome, but who did not have diabetes, were randomized to 0.6 mg colchicine or placebo capsules twice daily for three months. Compared with placebo, colchicine significantly reduced C-reactive protein and erythrocyte sedimentation rate (Figure 5). The significant changes in homeostatic model assessment of insulin resistance, fasting insulin, and glucose effectiveness suggested metabolic improvements in the colchicine compared with the placebo group. We are now conducting a larger, adequately powered study to determine whether colchicine improves insulin resistance and other measures of metabolic health in at-risk individuals.

Figure 5. Effects of colchicine on inflammatory and metabolic measures 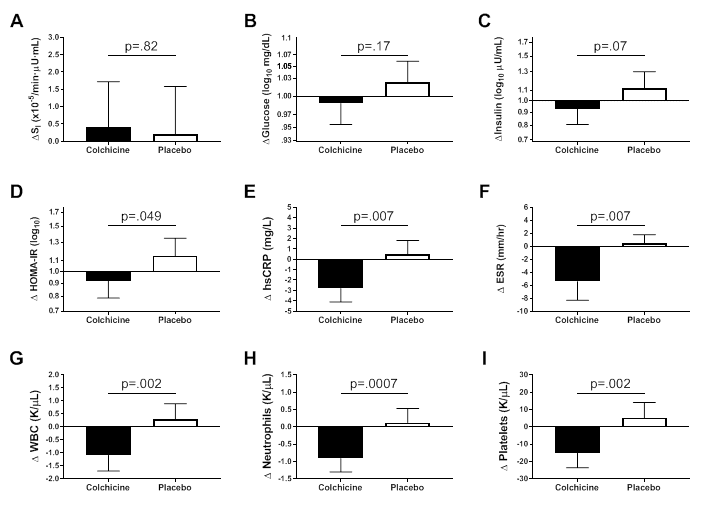 Metabolic and inflammatory changes after three months of study medication in participants randomized to colchicine (N=21) or placebo (N=19).