You are here: Home > Stojilkovic Lab

Signaling and Secretion in Neuroendocrine Cells 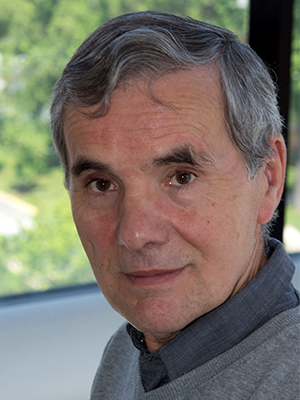 The main goal of the research in our Section is to examine cell-signaling cascades, gene expression, and hormone secretion in neuroendocrine cells from the hypothalamus and pituitary gland during development. We place special emphasis on the characterization of individual cells, using fluorescence imaging, patch-clamp recordings, simultaneous membrane potential/calcium and current/calcium recordings, electrophysiological and imaging recordings of single-cell exocytic events, single-cell RNA sequencing (scRNA-Seq), and single-cell quantitative reverse transcription polymerase chain reaction (RT-PCR). Our recent and ongoing work has focused on signaling, transcription, and secretion in the pituitary gland specific for age, sex, and tissue structure; pituitary cell heterogeneity, reflecting their postnatal gene expression; the role of 1-phosphatidylinositol 4-kinases and protein receptor tyrosine N2 phosphatase type in postnatal proliferation and maintenance of pituitary lineages; and cell-specific electrical activity and exocytic pathways. Current and proposed studies depend in part on the use of equipment in NICHD's Microscopy and Imaging Core Facility and the Molecular Genomics Core Facility.

Figure 1. Effects of a drop in extracellular pH on current responses in immortalized GH3 cells

A-D. Patterns of proton-activated currents in voltage-clamped single cells: a biphasic response composed of a transient spike phase and a sustained small-amplitude plateau phase during long-term stimulation with pH 6.3 (A and B), and two-current responses to pH 4.5 (C and D) in different cells.

E and F. Proton-concentration dependence of the peak amplitudes of fast and slow current responses; representative traces from a single cell during repeated proton application (E) and mean ± SEM values derived from 5–10 single-cell recordings per dose (F). Traces shown are representative of 6 to 10 cells per experiment.

Extracellular protons act as orthosteric ligands for proton-sensing G protein–coupled receptors (GPRs) and acid-sensing ion channels (ASICs), as well as allosteric regulators of other GPRs and channels. Until now, the expression of these receptors and channels and their roles in pituitary-cell functions have not been systematically investigated. We recently systematically evaluated the expression of proton-sensing receptors and channels in rat pituitary cells. The main focus in our work was on ASICs encoded by a family of five genes, generating seven subunits: ASIC1a, ASIC1b, ASIC2a, ASIC2b, ASIC3, ASIC4, and ASIC5. Our RT-PCR and scRNA-Seq analyses indicate that four mRNAs were expressed in rat anterior pituitary glands (ASIC1a, ASIC1b, ASIC2b, and ASIC4), whereas GH3 cells (a rat anterior pituitary cell line) express ASIC1a and ASIC2b only. We also provided, to our knowledge, novel information about cell type–specific expression of ASIC mRNAs, proteins, and currents. Our scRNA-Seq and double immunostaining analyses demonstrated the expression of ASIC1 mRNA and proteins in all secretory cell types. In contrast, Asic1 expression was detected in less than 5% of folliculostellate cells (FSCs), and ASIC1 immunoreactivity was detected only in about 3% of these cells. Asic2 was expressed in FSCs, gonadotrophs, thyrotrophs, and somatotrophs, but not in corticotrophs or lactotrophs. Asic4 was exclusively expressed in lactotrophs. Consistent with these findings, we detected a proton-induced current with the biophysical and pharmacological characteristics of ASICs in normal and immortalized pituitary, i.e., a fast-developing current activated by a drop in pH, which rapidly desensitized and was abolished by removal of bath sodium and application of amiloride. The current was observed in corticotrophs, thyrotrophs, somatotrophs, and GH3 cells. The pH profile of the ASIC–like current, with an EC50 pH-value of 6.5–6.7 in normal and immortalized pituitary cells, is consistent with data in the literature in other cell types. We also observed the ASIC–like current in gonadotrophs and lactotrophs, but only in a small fraction of such cells.

We also detected another proton-activated current in secretory cells, with a profile distinct from ASIC–mediated currents; the current developed slowly and deactivated rapidly, was not blocked by amiloride, nor did it desensitize during prolonged stimulation or show rundown of current during repetitive stimulation. The slow-developing current was present in all secretory cell types, but the amplitude was significantly higher in gonadotrophs and lactotrophs not exhibiting ASIC current. We used an electrophysiological protocol, with pH ranging between 7.4 and 4.5, to separate ASIC from slow-developing currents. The ASIC current was activated by changes in pH from 7.4 to 6, whereas the slow-activating current required a higher proton concentration, a pH ranging between 5.5 and 4.5. In further contrast to ASIC currents, the slow-developing current was not abolished by total replacement of bath sodium with NMDG (N-methyl-ᴅ-glucamine), with only a minor reduction in current amplitude under those conditions. Our investigations further showed that the current did not reverse when the holding potential was dropped below the potassium equilibrium potential and that the current was not abolished when bath sodium was replaced by calcium, nor was it abolished by removal of bath calcium. The results suggest that the slow-developing current could be mediated by cation non-specific channels. Further studies are needed to identify these channels.

Our scRNA-Seq and immunocytochemical analyses also confirmed the expression of the GPR68 gene in non-excitable FSCs of the anterior pituitary, as previously reported, but not in native gonadotrophs, in contrast to a previous report describing the expression and role of this receptor in immortalized mouse gonadotrophs. We also reported for the first time, to our knowledge, that the endothelial cells of pituitary portal capillaries express the GPR4 gene, which may contribute to the proposed active role of the vasculature in pituitary function [Reference 1]. 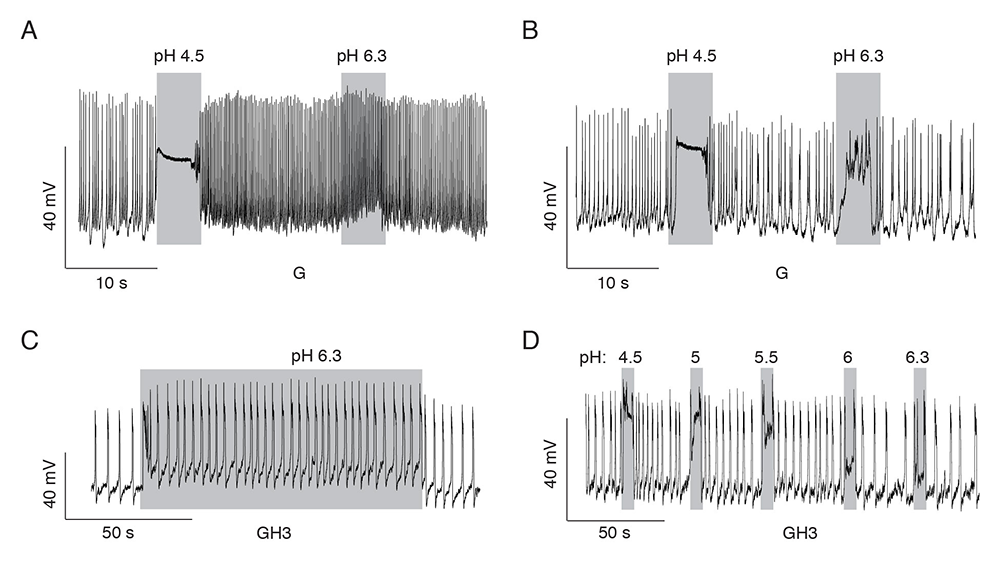 A and B. Gonadotrophs expressing slow current (A) and both currents (B).

It is well established that thyroid-stimulating hormone (TSH) regulates thyroid hormone synthesis and release from the thyroid gland by activating TSH receptors (TSHRs) expressed in thyroid follicular cells. Several extra-thyroidal expression sites of TSHRs have also been reported, including in the normal and adenomatous human pituitary, and receptors were identified in normal and immortalized FSCs. It has also been suggested that TSHR autoantibodies can suppress intrapituitary TSH levels independently of circulating thyroid hormone levels, suggesting that the receptors are functional. Using cultured rat pituitary cells and double immunocytochemistry, we showed, for the first time, the presence of immunoreactive TSHR in the sister cells corticotrophs and melanotrophs. The receptors were functional, as shown by a TSH–induced rise in cAMP production at an amplitude sufficient to allow the release of this messenger into the extracellular medium. The function of the receptor was further confirmed in single-cell calcium measurements in the identified corticotrophs and melanotrophs. We also showed that, in static cultures and perfused pituitary cells, TSH stimulates ACTH and beta endorphin secretion.

In general, the rise in cytosolic calcium concentration in corticotrophs and melanotrophs could be coupled to stimulation of Pomc gene (gene responsible for proopiomelanocortin production) expression and/or activation of the regulated exocytotic pathway. However, in our experiments, we did not observe changes in Pomc expression. In vitro TSH was effective in 2 to 200 nM concentration range, which is consistent with measurements of TSH levels in rat portal blood of around 360 nM. We also observed concentration dependence of cAMP production and hormone secretion in this concentration range. Several lines of our investigations confirmed that the stimulation of calcium influx in corticotrophs and melanotrophs bathed in calcium-containing medium reflects the coupling of TSHR to the Gs signaling pathway (which activates the cAMP pathway) and cAMP–dependent facilitation of voltage-gated calcium influx. Furthermore, our results argue against the role of protein kinase A in these processes. Further studies are needed to identify channels modulated by the Gs signaling pathway independently of protein kinase A. In general, cAMP can regulate excitability of pituitary cells and calcium-dependent hormone secretion directly by activating hyperpolarization-activated cyclic nucleotide–gated channels, which have been identified in immortalized mouse corticotrophs. cAMP could also regulate excitability and calcium influx indirectly through EPAC (exchange factor directly activated by cAMP), whose role in CRH (corticotropin-releasing hormone)–induced signaling via a cAMP–dependent mechanism has been described in corticotroph cell lines. These results indicate that TSH is a potential paracrine modulator of anterior pituitary corticotrophs and melanotrophs, controlling the exocytotic but not the transcriptional pathway in a cAMP/calcium influx–dependent manner [Reference 3].

To address this issue, we studied the expression profile of the testicular steroidogenic pathway and evaluated testicular responsiveness to in vivo application of the placental gonadotropin hCG (human chorionic gonadotropin) and the GnRH (gonadotropin releasing hormone) analog buserelin acetate, during EAE. We observed no changes in the number of interstitial cells in EAE animals, but the expression of the insulin-like 3 gene was reduced at the peak of the disease, implying that the Leydig cell's functional capacity was affected. Consistent with this finding, the expression of most steroidogenic enzyme genes and proteins was reduced during EAE, including StAR, CYP11A1, CYP17A1, and HSD3B. No signs of testicular inflammation were observed. Recovery of steroidogenesis was observed after injection of hCG, the placental gonadotropin, or buserelin acetate, a gonadotropin-releasing hormone analogue, at the peak of EAE. Together, our results are consistent with the hypothesis that impaired testicular steroidogenesis originates upstream of the testes and that low serum LH is the main cause of decreased testosterone levels during EAE [Reference 4].

Endocrine pituitary cells secrete hormones using both calcium signaling pathways: spontaneous voltage-gated calcium influx and receptor-controlled IP3 (inositol trisphosphate)–dependent calcium mobilization coupled with facilitated voltage-gated calcium influx. Pituitary lactotrophs, which are the subject of the present study, exhibit spontaneous plateau-bursting of electrical activity, resulting in calcium transients that have sufficient amplitude to trigger basal prolactin (PRL) secretion. In such cells, the physiological mechanism for control of PRL release is via dopamine suppression of basal secretion. Furthermore, thyrotropin-releasing hormone triggers IP3–dependent calcium mobilization from intracellular stores and induces additional hormone secretion. However, the contribution of phosphoinositides beyond the role of PI(4,5)P2 supporting IP3 production in pituitary cell exocytosis remains poorly understood, which reflects the difficulties in up- or down-regulating the expression of enzymes that control phosphoinositide levels in cultured pituitary cells as a result of the resistance of these cells to conventional transfection procedures. The use of immortalized pituitary cells, such as GH3 lacto-somatotrophs, is also limited, because these cells predominantly secrete hormones in a constitutive manner.

This prompted us to use a pharmacological approach in this initial study on the role of phosphoinositides in calcium-secretion coupling in cultured pituitary lactotrophs, focusing on PI4P, PI(4,5)P2, and PI(3,4,5)P3. Recently, we analyzed the contribution of phosphatidylinositol kinases (PIKs) to calcium-driven prolactin (PRL) release in pituitary lactotrophs: PI4Ks, which control PI4P production; PIP5Ks, which synthesize PI(4,5)P2 by phosphorylating the D-5 position of the inositol ring of PI4P; and PI3KCs, which phosphorylate PI(4,5)P2 to generate PI(3,4,5)P3. We used common and PIK–specific inhibitors to evaluate the strength of calcium-secretion coupling in rat lactotrophs. We analyzed gene expression by scRNA-Seq and qRT-PCR analysis; intracellular and released hormones were assessed by radioimmunoassay and ELISA; and single-cell calcium signaling was recorded by Fura 2 imaging. Single-cell RNA-Seq revealed the expression of Pi4ka, Pi4kb, Pi4k2a, Pi4k2b, Pip5k1a, Pip5k1c, and Pik3ca genes, as well as Pikfyve and Pip4k2c genes, in lactotrophs. Wortmannin, a PI3K and PI4K inhibitor, but not LY294002, a PI3K inhibitor, blocked spontaneous action potential–driven PRL release with a half-time of about 20 min when applied in 10 µM concentration, leading to accumulation of intracellular PRL content. Wortmannin also inhibited increase in PRL release by high potassium, the calcium-channel agonist Bay K8644, and calcium-mobilizing thyrotropin-releasing hormone without affecting accompanying calcium signaling. GSK-A1, a specific inhibitor of PI4KA, also inhibited calcium-driven PRL secretion without affecting calcium signaling and PRL gene expression. In contrast, PIK93, a specific inhibitor of PI4KB, and ISA2011B and UNC3230, specific inhibitors of PIP5K1A and PIP5K1C, respectively, did not affect PRL release. These experiments revealed a key role of PI4KA in calcium-secretion coupling in pituitary lactotrophs downstream of voltage-gated and PI(4,5)P2–dependent calcium signaling [Reference 5].